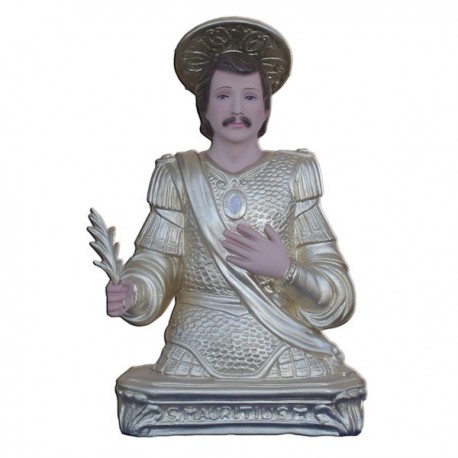 Statue of Saint Maurice (half chest) of resin, 35 cm, handmade in Italy

Statue of Saint Maurice (half chest) of resin, 35 cm, handmade in Italy

He was born in the III century in Tebe. He is called also “Mauritius” which means “african knight”.

When he was young he enlisted  the Roman Army and he founded the Legion of Thebe, becoming its commander.

In 285 began the extermination of the Christians . Between France and Switzerland the christian populations suffered tyrannies  and massacres.

For this reason it began the development of many groups which took position against the roman soldiers and the emperor asked the intervention of the Legion of Thebe.

Maurice neglected to obey and he sent a letter to the emperor with the explanation: “The only God who we recognise is the christian God, so he will always be the Only for which we will fight”.

Diocletian, who considered himself like a God, was offended and he ordered the decimation of the legionaries.

No one surrended to the betrayal, so every legionary was beheaded, Maurice too.

They were buried in a mass grave.

In the classic iconography he is illustrated as a warrior with the armor and with a palm, the symbol of the martyrdom.

He is considered the patron of the Alpines.