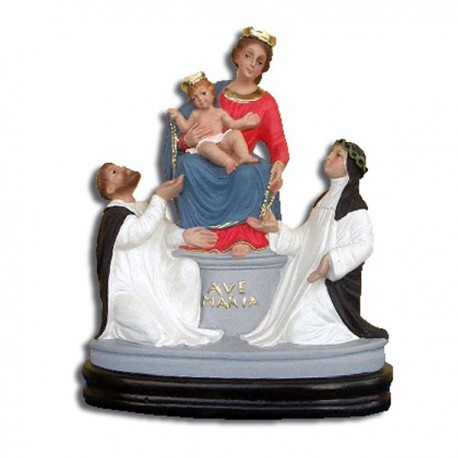 Statue of the Virgin of Pompei of resin, 21 cm, handmade in Italy 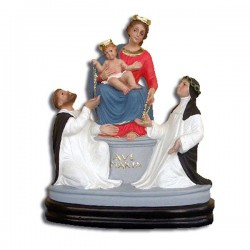 Statue of the Virgin of Pompei of resin, 21 cm, handmade in Italy

The story of this image is very long and complicated. It hails from the second half of 1890, when Bartolo Ionco went to Naples to buy an image of the Virgin of the Rosary, which he saw in a shop.

In Via Toledo he met his teacher Padre Radente, who recommended him to go to the Rosary Conservatory of Porta Medina and to pick an old painting up, to restore it.

The painting was in bad condition and it showed some contradictions in the Virgin’s attitude and in the image of Saint Rose, who it was not Saint Catherine, as the Dominican tradition wanted.

The canvas was placed in the SS. Salvatore parish and it was subjected to many restorations and modifications. Then it was exhibited in a lateral chapel of a Shrine.

In the following years thousands of pilgrims visited the Shrine and they gave copious riches to the Virgin.

The last restoration happened in 1965, when the precious stones were removed for security reasons.

The Virgin is represented on her throne with the Baby on her knees. She is passing a rosary crown to Saint Dominic who is at her foot and another one to Saint Catherine.