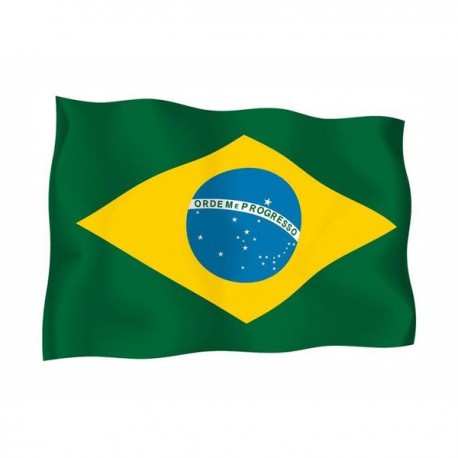 Flag of Brasil of nautical polyester, for external use only, with digital print.

Flag of Brasil of nautical polyester, for external use only, with digital print.

From the 15th of November 1889 the flag of Brazil is green, with a big central rhombus, in which there is a blue circle with some white stars of different sizes and a white stripe which crosses it, with the motto “ordem e progresso”, “order and progress”.

The green field and the yellow lozenge were part of the flag which was adopted in 1822, when the country achieved the independence from Portugal and the Empire was proclaimed.

In 1889 the imperial crest was substituted from the view of the nocturnal sky of Rio de Janeiro, when it was proclaimed the Republic. Every star of the constellation represents a federal country. The last change comes from 1992, when the stars became 27.

The flag’s constellations are reallistically represented, even though the size of the stars does not reflect their importance.

In 1922 they was added some stars to the Canis Major’s constellation.