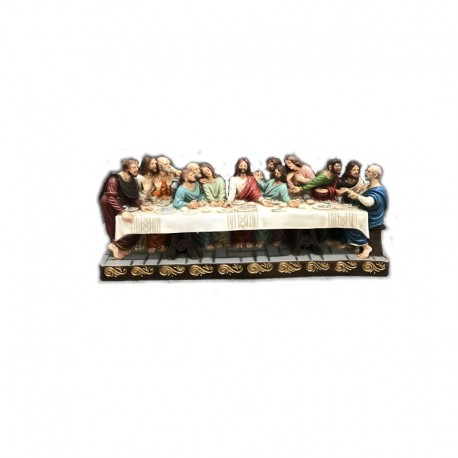 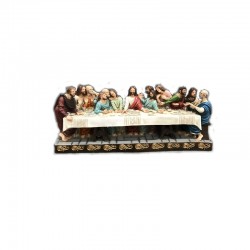 Full resin painting, printed and hand perfected by skilled artisans, who delete the imperfections. When the statue is perfectly smoothed it is carried to the coloring section, where it is hand painted with indelible varnishes, according to the classical iconography. The resini s a plastic material, which is solid thanks to hardener substances. It is resistant to the atmospheric agents. The difference with the fiberglass is that it does not contain the fiber.

Jesus sent two disciples to the town to find a house which could receive him to celebrate the Jewish Easter. He told him that they would meet a man at a fountain. They had  to follow him and to ask to his patron the hospitality.

The two guys found his speech very unusual because that action was only for women.

When they came to the town they saw a man with a full amphora who was leaving the fountain. They followed him and when the arrived to the house the asked the patron, who gladly accepted.

This man surely was a Jesus’ sympathizer and  he probably was also a relative of  Mark the Evangelist.

Before sitting at the table Jesus made the foot washing, then he seated at the centre of the table. On his right there was Peter, on his left he had John with Judas.

According to the Matthew’s Gospel, Judas told John that there was a traitor between them.

At that time the popular custom wanted many trays on the table, where to dip the bread.

When Jesus saw the dismay of the Apostles and he realized who was the traitor, he dipped the bread and he gave it to Judas, telling him to do soon what he wanted. The Apostles did not understand what the Christ’s speech meant.

Suddenly, Jesus made an unusual action of the Easter Rite. “As they were eating, Jesus took bread, and blessed, and brake it; and  he gave to the disciples, and said, ‘Take, eat; this is my body.’”

“And he took a cup, and gave thanks, and gave to them, saying, ‘Drink ye all of it; for this is my blood of the covenant, which is poured out for many unto remission of sins.’” Matthew 26:26-28

The Last Supper inspired numerous artists of the Renaissance, who made inimitable works of art.

Between the copius Last Supper’s paintings, the most famous is “The Last Supper”of Leonardo da Vinci, who painted it between 1594 and 1598.