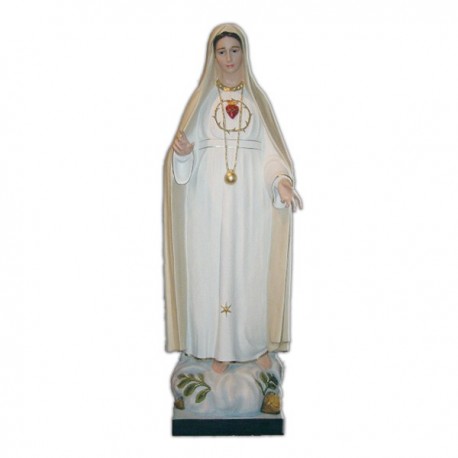 Statue of the Virgin of fatima second appearance, 182 cm of fiberglass, handmade in Italy. 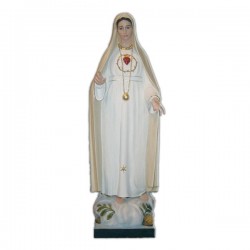 Statue of the Virgin of fatima second appearance, 182 cm of fiberglass, handmade in Italy.

Fiberglass statue, internally empty and very light. It is suitable to be carried during the processions. The manufacturing is entirely manual. When the two parts are linked, there is the finishing of the statue and it is perfectly smoothed, then the statue goes through the coloring section. The skilled decorators hand paint using particolar varnishes, conforming to the traditional iconography. The fiberglass is a plastic material, very resistant and humidity absorber which is used in many sectors: industry, furnitures, building of boats, airplanes, vehicles, garden swimmingpool etc

The story tells us that in 1917 in Cova di Iria (Portugal), three shepherds had the first vision.

According to their tale, on the 13 of May 1917, while they were grazing their herds, they saw a cloud that, clearing, make a lady’s image to appear. She wore a white clothing and she had a rosary in her hands.

They understood she was the Virgin. She talked to them and she gave them a date for the following months.

The apparitions were copious and everytime the Virgin revealed them a coming happening. The end of the World War and the danger of an other one.

Another announced event was that of the “Miracle of the Sun”, which was watched by thousands of people: the participants narrated that during a heavy shower suddenly it stopped raining , the sky rent and a bright sun appeared. It changed colour and it enlarged so much that it seemed to fall.

The Virgin’s revelations are called “The Fatima’s Misteries” because they may contain revelations about coming events wich could shock the human certainties.