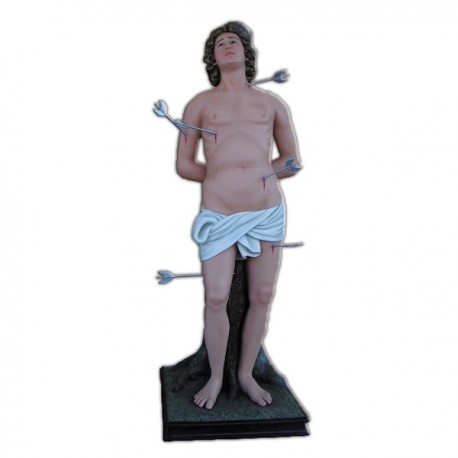 Statue of Saint Sebastian 180 cm of fiberglass, handmade in Italy. 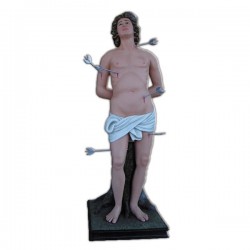 Statue of Saint Sebastian 180 cm of fiberglass, handmade in Italy.

Saint Sebastian martyr is commemorated on the 20th of Jenuary.

He lived in the III century during the reign of Diocletian. He was in his army, performing a role which allowed him to support the imprisoned Christians, to provide to the burial of the martyrs and to spread the Christianity.

It is narrated that, when he went to the prisons, he knew two young brothers, who were condamned because they were christians. When they were at the point of death Sebastian convinced them to die heroically.

While he was talking, suddenly his face was irradiated from a miraculous light, which left the people astonished. Also Zoe, who was dumb from 6 years.

She asked him the grace. He put his fingers on her mouth, making the sign of the cross. He began to speak.

This event contributed to spread the christian faith between the common people and also in the aristocracy.

Diocletian came to know that his favourite tribune practiced this faith. He judged him a traitor and he arrested him.

He was stripped and tied to a tree, his body was used as a target for the archers, finally he was killed.

In 367 Pope Damasus ordered to build a Basilica in the Via Appia: now a days it is one of the 7 main churches in Rome.

In the classical iconography he is illustrated as a half-nacked youth, tied to a tree or to a column and pierced from many arrows.

He is considered the patron of the needles  makers, of the archers, of the Municipal Polices, of the sports and of the soldiers.